I wanted to share some of the different steps of the image taking process I used for M51. There are 4 different types of images taken to generate the single output image

All of the images below are stretched to exaggerate their effects and not well processed.

First we look at an image with just the lights. Here you can see a couple of things. There is a lot of vignetting around the edges and the center is brighter. Also there is a lot of noise if you zoom in closely 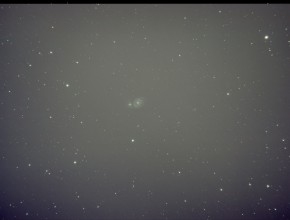 Here you can see a stacking with just lights and the flats. 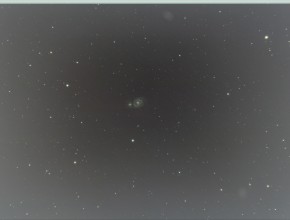 Hmm…this doesn’t look very good does it? You can see that it’s almost just inverted the image of just the lights.

You can also see two spots on the image now. I realized a little late that I took the flats before cleaning the lens, so the spots aren’t really there. Ignore those for now.

Now lets add in the bias images to the stacking process. Suddenly the image looks much flatter! The bias images remove some noise from the Lights and Flats and give a better final stacked output. 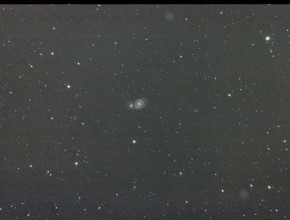 But what you see now is a ton of weird splotchiness and banding. That’s ugly 🙁

Ok now lets look at everything together! Now if you zoom in you can notice two things. The noisy streaks are a bit less pronounced, and the banding and other stuff is gone. The darks help to compensate for the predictable noise on the sensor, but there is still a little bit of streakiness due to the random noise. The best solution for that is probably cooling the sensor to remove noise! 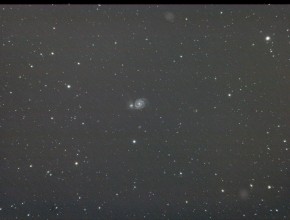