My first couple usages of the tracker went pretty well, but it was a nightmare to setup the polar alignment. There was a lot of wiggle where the tripod mount screwed to the tracker. I didn’t feel safe with the amount of wiggle, and every time I adjusted the camera it would mess up the alignment.

Most of the wobble seemed to be where the T-Nut was set into the plywood. The T-Nut sticks out too much so the tripod mount isn’t flush.

To fix it I just bought two metal ‘hobby’ brackets at Lowes. 2 of them seemed to be about the same thickness of the T-Nut. I had to cut holes for them to fit over the T-Nut. 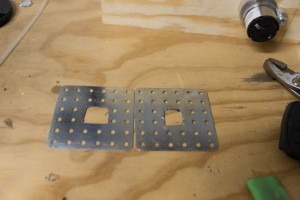 Now the mount is much more stable

I also added a small finder scope to the tracker. You can set the alignment of the scope by putting a straw on the hinge and aiming it at something relatively far away in the house. Then you can adjust the finder scope to calibrate it. 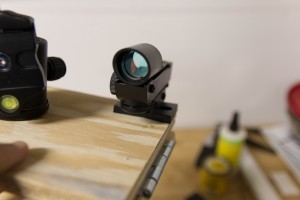 I took some test shots but I apparently messed up the focus after I initially set it up. All the stars looks like big orbs instead of points.

The alignment was much easier though, and I noticed even less movement from shot to shot over 30s exposures and I couldn’t see any trails.