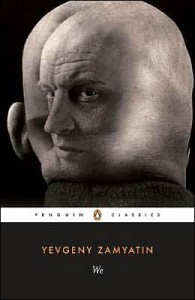 I recently came across this novel from some offhanded comments on Reddit. I had never even heard of it before, and I don’t know why.  I’m glad that I took a chance and read it.

1984 and A Brave New World are always held up as the two great pillars of Dystopian futures. George Orwells overbearing future where totalitariasm has won out in contrast to Huxley’s world of control through happiness drugs and pure consumerism.

We describes a world where industrialism has pushed it’s way into all of life.  Every person is but a cog in a machine, a slave to the great schedule. Even sex is scheduled in this world. The protagonist doesn’t even have a ‘name’ as we would know it, just an assigned Leter-Number designation. D-503.  Everyone is nameless, and there is little emotion in the world. The world is in great contrast to the fear-minded war state of 1984 or the extreme exuberance and shallowness of A Brave New World.

At times it does get a little ‘out there’ but I don’t think it distracts from the story too much. The real treasure of this book is the depiction of this small chunk of society ruled by ‘reason.’

I believe We could be considered a third pillar of Dystopian futures, but I do think this novel is a notch or two below 1984 and A Brave New World. It’s something to be read and compared to those two, but I think loses some merit if you haven’t read (or don’t plan to read) the other two.